Eco-villages and following your heart

Many years ago I had this dream of travelling to the US and Canada to visit alternative communities.
I was fascinated by the concept of eco-villages- urban or rural communities in which people cohabit to varying degrees, according to a set of social, economic and ecological values. In essence, they are intentional communities aiming at creating sustainable life practices, both in local and global terms. It was a very interesting trip that took me all the way from Ithaka in NY state, where an ecovillage with the first local currency was set up,  to Alaska, where I spent several weeks in a macrobiotic community.

Ithaka was so interesting because it showed me that you don’t have to be radical to live in such a place. Here white-collar professionals, such as professors of the local college, teachers and a hundred other people cohabit in a peaceful and functioning cohousing model. Most have jobs in the local town, others are self-employed, everyone has their own house and private household economy. Their community is connected by several community houses, as well as a big local organic farm, from which they get their fresh vegetables and where inhabitants can volunteer, as part of a local food cooperative.
There are no communal obligations, no one expects you to stand at the gate at 7:00 AM to chant Om at sunrise, you can join communal life to the extent that you wish and feel like.
I think this needs to be pointed out because there can be misconceptions with regard to alternative communities that in effect are incredibly diverse in their structure and organising principles (https://ecovillageithaca.org/).

The community in Alaska was very different from Ithaka, its founders were four families that wanted to live in closer connection to nature and th 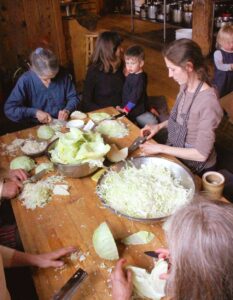 ere was a conscious wish to be further apart from mainstream society. This community adheres to strict vegan and macrobiotic principles (a plant and grain-based diet that excludes sugar, dairy and meat), a life in accordance with the natural life cycle. They home-schooled their children in order to underline their commonalities, instead of their differences (« this one is the clever one, the other is good a sports » etc).

This community largely shared their finances and collectivised the decision making process. The thing I take away from this community is the fact that they never gave up. Here is a group of people who started off by living in Teepees in the forest of Alaska and have managed to keep on going. They now, thirty years later, are living in an actual self-built village of huge wooden structures. I would not want to live there, but I have the deepest respect for their stamina and endurance. Also, they showed me that you can fulfil your dreams.

I learned so much on that trip, I met so many people who left a lasting impression on me. Still now, more than ten years later, I am inspired by what I saw and learned.
I am now sharing this for two reasons.

One, because in these times of forced separation and isolation it seems pertinent to remember supportive models of community, as well as collaborative social structures.
Levels of loneliness, already problematic before Covid, have become unbearable for many today.
Also, increasingly there is the danger that we’re viewing one another as a potential threat to our well-being and I worry about the levels of fear from one to the other and the reactions these can generate.
Ecovillages can be important anchors and reminders of a consciousness, in which our shared humanity is consciously practised and encouraged.

And secondly, I am sharing this, because:
I almost didn’t go on this trip.

It took me two years to find the courage to set off and have a look on the other side of the world.
For two years I found reasons why not to go- money, being « responsible » (my mind actually told me that it was more responsible not to go!), being afraid of the unknown, thinking it was foolish to have this dream, having no idea what these people would think of me if I showed up on their doorstep, not knowing how to contact them and what to ask…

I think many of us have two lives.
The life we live and an unlived life within us.
What stands between the two is mostly fear that has the habit of camouflaging itself under a series of rational, plausible justifications for why we shouldn’t do the things we’re called to do. Fear is a nasty thing and if you allow it can steal your greatest dreams.

Don’t allow this to happen! This is where community is so important because the testimony of others can give you strength.
Meaningful change can happen in small and achievable steps.
The world needs your joy, your insights and your talents.
If you want support in letting go of self-doubt, anxiety or hesitation then please be welcomed to the online course the  « Day one or one day…you decide! The Adventure that is you« , a coaching and EFT online course to help you reach a goal in your life. It’s also a nice opportunity to connect to a loving group of people if you are yearning for more community (you don’t need to have an idea of what you want to work on!). So far only women have registered, so it feels to me like this will be a healing women’s group.
From some, I have already heard that their focus will be on healing their confidence in love, in reaching out again, in daring to be vulnerable.
Please be welcomed on this journey!